Published by The Middle East Monitor

South African Jewish anti-apartheid stalwart Denis Goldberg believes the Israeli occupation of Palestine and the use of separate laws for different groups of people makes Israel an apartheid state.

“There is no doubt in my mind that Israel is an apartheid state,” Goldberg, who fought alongside late South African President Nelson Mandela and other activists against apartheid, told a gathering in Johannesburg.

“Having lived through apartheid in South Africa, I cannot allow in my name the same kind of oppression to go on,” Goldberg said at an event discussing lessons for the Palestine-Israel conflict from those who struggled against apartheid.

The Jewish anti-apartheid activist, who was sentenced to life imprisonment in the historic Rivonia Trial during the apartheid era in South Africa in 1964, said he has to speak out against Israel’s segregationist polices.

“When I come across the deliberate exclusion of people from the benefits of their wealthy societies, whether on class, race or religious grounds, I have to speak out,” he said.

Goldberg said he has a responsibility as a human being to uphold justice, truth and righteousness, “just as I did as a first-generation white South African” who opposed apartheid.

He said that he does not oppose Jews, but the Israeli government’s Zionist polices.

Goldberg said some people ask why Israel is an apartheid state, when it is not like how South Africa used to be during the apartheid era. They say that in Israel there are some Palestinian members of parliament, and that the Palestinians have equal rights.

“Well I say you don’t need to be like South Africa to be an apartheid state, there is a definition in international law through the UNESCO declaration on apartheid,” he said.

He said what constitutes apartheid is government laws, regulations and policies that distinguish between groups of people on the basis of race or religion.

He also faults Israel for destroying the Palestinians’ livelihood and economy by uprooting their centuries-old olive trees, water and irrigation systems.

Goldberg said the situation in Israel is not as complicated as the Zionist lobby tries to make it seem.

“It’s simple: the dominant group excludes the indigenous people from their equal rights within the borders of Israel itself and in the occupied territories, in breach of international law,” he said.

He said these actions showed an attitude that Palestinians were considered lesser people, which is similar to what happened in South Africa during the apartheid era when blacks were barred from voting.

The anti-apartheid activist added that South Africans have a moral duty to protest what is happening to the Palestinians.

He also advised Israelis and Palestinians to start thinking of how to live together, giving the example of Northern Ireland where Protestants and Catholics learned to live together despite their differences.

Campaign Against Arms Trade, the Palestine Solidarity Campaign and War on Want publish a new report detailing how trading arms with Israel makes the UK complicit in Israel’s continuing violations of human rights and international law. We call on the UK government to implement an immediate two-way arms embargo to end all arms sales to and purchases from Israel. 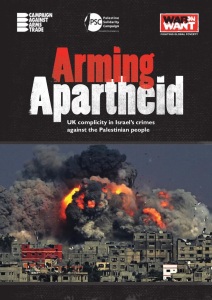 The Israeli Knesset last night has extended the “family reunification prevention” bill for Palestinian families for another year. 57 MKs have voted in favor of the extension, 20 voted against and 5 abstained.

The bill prevents family reunification between Palestinians living in Israel and their spouses from the West Bank or Gaza. It also prevents them from living in Israel, unless the husband is over 36, and the wife is over 26.

The bid was first presented during the Ariel Sharon cabinet in 2002, in hopes to “protect the Jewishness of the state” and prevent the return of Palestinian refugees from the back door, using a security pretext which divides Palestinians, and Judaizes the capital of Jerusalem. Israeli authorities have regulated the law starting 2003 as a temporary law for a year. However, it has been extended yearly on a regular basis now upon recommendations by Israeli security forces.

The Supreme Court has denied numerous appeals presented by human rights organizations to cancel this bid which prevents thousands of Palestinian families from living together under the same roof, tearing families apart for years.

On 7 April 2015, during Passover holidays, a group of hundreds of settlers accompanied by Israeli security forces came to Birkat al-Karmil – a natural pool close to the village of al-Karmil, which lies in the southern Hebron Hills within Area A. In 2011, Yatta Municipality renovated the site, creating a park there and restoring an ancient pool at its center.

B’Tselem’s investigation found that at about 2:00 P.M., hundreds of settlers arrived at the pool accompanied by dozens of soldiers, Border Police, and representatives of the Civil Administration (CA). The security forces ordered the Palestinian bathers to leave the pool and remain on the edge of the park. They allowed the settlers, however, free and exclusive use of the rest of the park. At about 5:30 P.M., the settlers and the security forces left the area.

“According to media reports, reveal that the settlers came to the pool on the initiative of the Susiya Tour and Study Center. In its publications, the center described the pool as the historical site of the Biblical settlement of Carmel and emphasized that the visit was authorized and accompanied by the military. The center reported that some 1,000 people had taken part in the tour, including Chief Military Rabbi Rafi Peretz, and that similar events have been held at the site for several years, particularly during the festivals of Sukkot and Passover.

According to testimonies collected by B’Tselem, when the settlers arrived at the pool there were almost 200 Palestinians there. Some were bathing in the pool, while others were relaxing in the park. Muhammad Mahaniyah, 20, a resident of Yatta, told B’Tselem field researcher Musa Abu Hashhash that when the settlers arrived, accompanied by the security forces, he was bathing in the pool with friends:

A Border Police officer ordered me to get out of the water quickly. At first I refused and told him that I wanted to be in the pool and had a right to be there. I said that I had no problem with the settlers swimming along with me. He threatened to use force if I didn’t get out of the water quickly, so my friends and I had no choice but to get out. The soldiers ordered the Palestinians who were around the pool to move back to the edge of the park, to stay there, and not to approach the settlers.

At about two o’clock I went to swim in the pool, which is about 500 meters from my home. When I got there, I saw groups of settlers moving towards the pool. There were dozens of soldiers and Border Police officers with them. The settlers began to undress and jump into the water. I also jumped in with my brother Muhammad, 16, and we began to swim. The settlers complained about our being in the pool and three young settlers started swimming towards us. Some soldiers intervened and asked them to move away from us. After they swam away, one of the soldiers ordered us to get out of the water. I refused and stood by the edge of the pool. Another soldier came up to me, pointed his gun at me, and shouted at me to get out of the water quickly. Muhammad and I got out of the water because I was afraid of the soldiers. As I got out, dozens of Palestinian residents around the pool shouted slogans against the settlers being there. The soldiers moved the residents away from the pool to the northern section of the park and prevented them from wandering around the park. In the meantime the settlers continued to swim while the soldiers guarded them. I stayed in the park until the settlers left at about half past five.

This incident is yet another example of how Israeli authorities operate in the West Bank. Almost any desire expressed by settlers, however capricious, is automatically facilitated at the expense of the Palestinian population. In this case, the military used its force and authority solely in order to allow settlers the pleasure of bathing at that particular location. This purpose is unjustified in its own right, and certainly cannot justify the entry of soldiers into Area A or any disruption to Palestinians’ lives.

This year Middle East Monitor’s annual Abdelwahab Elmessiri lecture was given by Ronnie Kasrils on 19 May 2015.

In his lecture, Ronnie Kasrils considered some of the remarkable similarities between apartheid South Africa and Zionist Israel. These coincide even as far as milestone dates are concerned. The characterisation firmly places both within the category of colonial settler states.

A prominent anti-apartheid activist, Kasrils was Minister for Intelligence Services from 27 April 2004 to 25 September 2008.